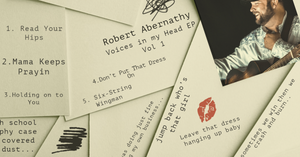 Welcome to my latest project, a new EP chalked full of some of my favorite melodies that I have pieced together over the past several months. Each song carries special meanings, cool story lines, great melodies and cowritten with some fantastic songwriters.  The title of the EP, "Voices in my Head" came from a long list of potential Album titles, but won out due to how these songs made its way to the studio.  They were literal voices in my head, tunes that made their way from the guitar into my brain, then on to voice memos on my phone--a process that will likely resonate with many songwriters.

Read Your Hips- Co-written with Craig Pruett. Produced by Josh Bright.  This song was born on a trip to play a show in Arkansas with Craig.  We had some time on our hands before the show to work on a few songs.  Came up with this cool melody... sounded something like this (Listen here).  Well, we wrote a song to that cool melody that didnt work, then wrote another. It didnt fit either. FInally we decided on an idea of this guy who is maybe on vacation somewhere tropical and meets a girl who cant speak english, and he can speak spanish, but its an attraction that he just explain.  The only language he can speak is "body language". Creative and fun. I hope you enjoy this song. Click here to listen. Click here to download.

Mama Keeps Prayin'- written by Robert Abernathy. Produced by Daniel Dennis.  I wanted Daniel to take this one on because I knew he would nail the vibe I wanted to create. Just a fun song to write and produce.  This fictional story is about a guy who "cant have fun cause mama keeps praying".  Poor guy doesnt stand a chance since mom went to revival.  He leaves the bar behind and it has a happy ending. I really enjoyed writing this one.  I hope enjoy it as well.  It was actually a song I wrote a long time ago, but wasnt happy with the melody, so I re-wrote it to this melody... (Listen here) and finally the recorded version here.  Enjoy Jon Conley on guitar (Kenny Chesney) click here to download

Holding on to You-co-written with Durand Robinson.  Produced by Josh Bright. Vocals produced, mixed and mastered by Prime Cut Recording, Daniel Dennis. I brought this song directly to Durand once I had the melody and chorus in place.  As usual, he worked his magic on the song and it came to life. A true Dan and Shay kind of song from the heart. You will love this one!  Click here to listen.        click here to download

Dont Put That Dress On- I wrote this about 4 years ago and recorded it locally.(Old version here)  I realized that I needed to bring it back to life in a new way and more modern sound. I took it to John Shaw, my friend and guitarist for Josh Turner. He produced it helped me repackage the lyrics and melody into a really cool new song.  Also co-written with Thomas White from White Cabin Publishing.  This sexy little song will make you want to to dance close with someone. I hope you enjoy!  Click here to listen           click here to download

6 String Wingman-Co-written with Durand Robinson.  This is the only song from the EP that had been previously released. I wanted to write a Billy Currington kind of song, and this is where it led. This idea was to write a song from the perspective of the guitar. What would he say?  And I ended up with this cool little song. Produced by Josh Bright.  I hope you enjoy this one. Click here to listen            click here to download